The tech world has mustered a sigh of melancholic resignation along with a squeal of justifiable outrage in response to Microsoft’s new release of its bloated virus-magnet operating system, Windows. 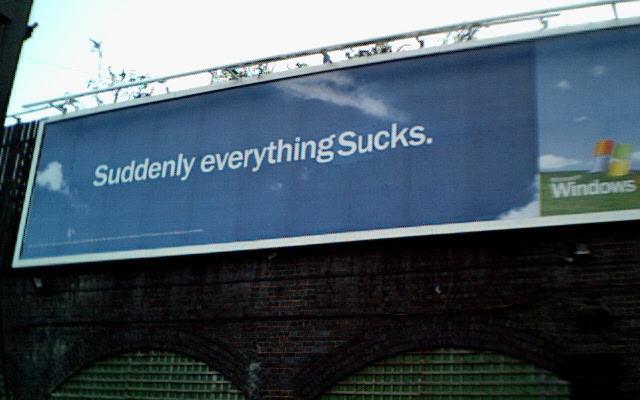 The latest incarnation is called Windows 10, not 9 as would make combinatoric sense. Perhaps 7 ate 9, who knows?

It is notable for being free for a year at least for people already using Windows 7 or 8, presumably because not everyone will see the point of upgrading.

It seems that the microserfs have been getting uppity and failing to upgrade as frequently as theirr corporate overlords deem profitable. Windows 10 will be the last version of the product. Henceforth, it will be delivered continuously through the now mandatory (at least for home users) Windows update service.

Which is not without its problems. Microsoft were forced to provide a tool allowing users to opt out of forced updates, after they were deluged by reports of buggy updates and users who were just plain displeased.

Another part of their approach has garnered more attention. Redmond have wholeheartedly appropriated the Google/Apple approach to operating systems — embracing the idea that gathering data on users is a more reliable business strategy than making software.

Not only will you be forced to upgrade every few years, or suffer the usual malware attacks, or just the occasional BSOD. Now you will be spied upon unless you can navigate, in the words of Cory Doctorow the welter of tickboxes that serve the same purposes as all those clean, ration-seeming lines on the craps table: to complexify the proposition so you can’t figure out if the odds are in your favor.

Windows 10 logs the sites you visit, the products you buy, the places you go, the words you type and the things you say

By default, Windows 10 logs the sites you visit, the products you buy, the places you go, the words you type and the things you say. These are shared with Microsoft.

Your wifi connection will be shared with your email contacts, and yes that does sound like a monumentally bad idea.

Sure, technical users may be able to stop Windows 10's prying eyes; there is a quickly growing cottage industry in telling you how to opt out of Windows spying and developing tools like Do Not Spy to help you do so. But defaults are powerful and keylogging is almost certainly not a good default for users, beneficial as it might be for Microsoft.

Microsoft released a list of features dropped from Windows 10 back in June.

Windows Media Center will go of which I can only say good riddance, it should get more people using VLC. Still there may be some die-hard stick-in-the-muds who want their OS to be able to play DVDs by default.

You will have to get the Pro or Enterprise versions if you don’t want mandatory updates forced on you. Windows 7’s desktop gadgets have gone and perhaps most importantly of all, Solitaire and Minesweeper won’t be installed by default.

If you upgrade from Windows 7 or 8, then Windows 10 will forget your child safety settings, any existing age-related website controls, app and game restrictions, PC time limits, plus your ability to view recent activity, wonâ€™t work on Windows 10. Nice.

Another great bug, now patched enabled hax0rs to bypass Windows 10 protections using a single bit. That was a good one.