My father, Chris Harvey, died two weeks ago on Friday, 29 April. He had had cancer for some time. The end was quick. So quick that his family weren’t able to get there before he died. Just the day before he had been sitting up in his chair smiling and joking with the medical staff and his visitors. 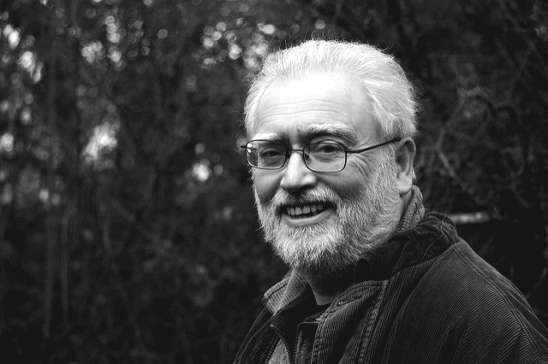 When took a turn for the worse on Friday afternoon, the medical staff quickly gave him a sedative. Kirsty, his speech therapist and friend was there with him. His breathing slowed, his eyes closed and soon he died. The end was as calm as it could be, there was as little suffering as there could be.

For me, the last weeks have passed by in a sort of emotional chaos. My feelings have been lurching all over the place. Guilt that I wasn’t there with dad when he died. A sense of loss and of the cruel finality of death. Nostalgia, as I looked through old photos of him in happier times. A strange relief that there is no more suffering to prepare for. A sort of confusion at the contrast between the emotional tumult and the calm, warm spring weather. I’ve cried more than I have in years.

I have been staying at dad’s flat whilst we do all the admin needed when a person dies. I woke in the small hours of last Tuesday morning and the absence was palpable. Instead of his reading light and the sound of him padding round the flat there was just silence. It was as if some reliable, omnipresent feature of the everyday world — the clouds or the trees — had suddenly vanished, leaving a world at once familiar and bafflingly alien.

When staying at the flat inrecent years, the soundtrack of the morning was the hum of his nebulizer mixed with the chirpy innanity of the breakfast news on the telly. It functioned as a sort of wake up call. Dad would cook asparagus and make strong black coffee and we’d sit there in the morning sunshine, chatting or listening to the radio. He would do the crossword and start the wordwheel. I would chip in with the wordwheel, not being much cop with the cryptic.

Since his laryngectomy several years ago, dad had struggled with speech. A significant challenge for one so garrulous! He had learned to speak again with a voice valve with the support of his wonderful speech therapists. In recent months, he had been pulling the valve out when he cleaned it.

The last time he pulled out his valve, the doctors had all but decided not to replace it. In the end they had managed to fit a new valve and he had a few final hours of speech before reverting back to his ubiquitous notebooks. He chose to joke around with us. Dad, a wit to the end, loved to laugh and to make others laugh. Primarily, though not exclusively by taking the piss. If he could sneak in some literary references, lever a little legal Latin in or show off some of his encyclopaedic knowledge of world history, gleaned from shelves creaking with popular and not so popular historical tomes, well, so much the better.

Though he knew his cancer was terminal, dad never showed any anger or bitterness. He was a kind, gentle guy at heart, and hated the thought of other people’s distress. So, he bore his suffering quietly and bravely. I don’t want to make him out as some sort of superhero. Lovely as he was, he was capable of monumental rants about high taxes, the evils of the Labour party, foreigners or bad parking.

We talked about his death when he was first diagnosed. Dad was a solicitor before retiring and he talked about the legal practicalities — wills, probate and cremation. He then told me about his uncle that had also died of lung cancer, how it had been drawn out and painful and he hoped his death would not be like that. I gave him a big hug, unable to think of words that would help. I can only imagine how terrifying the prospect must have been.

Weeks later, after almost dying from an internal haemorrage, dad told my sister that he had been scared of death before but now he wasn’t. I hope that these words were true.

It seems appropriate to end with an epitaph, attributed to W.C. Fields that dad loved to quote at any opportunity on the whole I’d rather be in Phillidelphia.