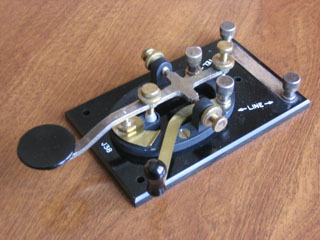 Today’s project is this tool, which translates to and from morse code. In my version of morse code I introduce the _ to stand for a space between words. Characters are separated by a space. Try typing something in alphanumerics first.

Web Audio API is not supported in this browser. Sound won’t work.


The genesis of the online morse code translator

I have been a bit obsessed with morse code of late. But this morning nor suggested that I build a web front end for the morse.hs and I’m a sucker for a challenge.

Like with any good challenge, I cheated a bit. This is technically a translation of the morse code translator tool into javascript. And I use the Web Audio API. So the audio won’t work unless you’re running Chromium, Chrome, Opera or Firefox 25+.

The translation took most of an evening. Including the bit where my drive decided to remount itself readonly half way through an aptitude upgrade. But that, friends, is another story.