Yesterday marked the launch of one of New Internationalist's first multimedia "immersive" long-form pieces, Smoke and Mirrors. Cooking smoke is responsible for a staggering amount of deaths in the world — more than malaria, tuberculosis and HIV/AIDS combined. Not only that, the need for wood contributes to deforestation and burning it drives climate change. Reporters Ingrid Gercama and Nathalie Bertrams approached New Internationalist to act as a media partner and turn their long form report into something that would work on the web. 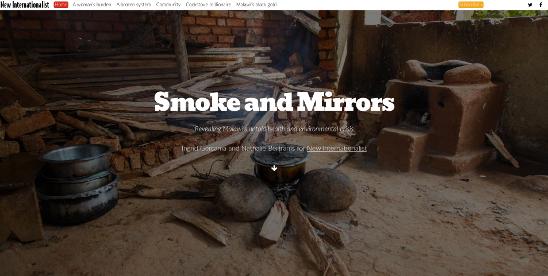 We decided that the content was complex and important enough to merit creating a custom subsite. We used a template from HTML5up as the basis for the site, with some tweaks and additions. The initial draft took me about two days working in vim with plain old HTML5 and some server side includes. This was an old school, nineties way to do things, and contrasted rather with the fancy immersive story we were creating, I’ll grant you, but working this way is surprisingly fast if you know what you’re doing.

Later drafts were worked on by semi-technical editorial staff using the Atom editor, which was rather slower, mostly as they tried to get their heads round how the HTML templates worked.

I think that the end result tells the story pretty effectively, though in the longer term it’d be nice to create these types of pieces within our Drupal CMS in a way friendly enough that our non-technical staff could work on similar pieces.