My final day with Elm, at least for now started out a bit challenging. As before, the examples in the book are for elm version 0.13 not 0.14 and there has been enough change that porting the example program across was annoying. 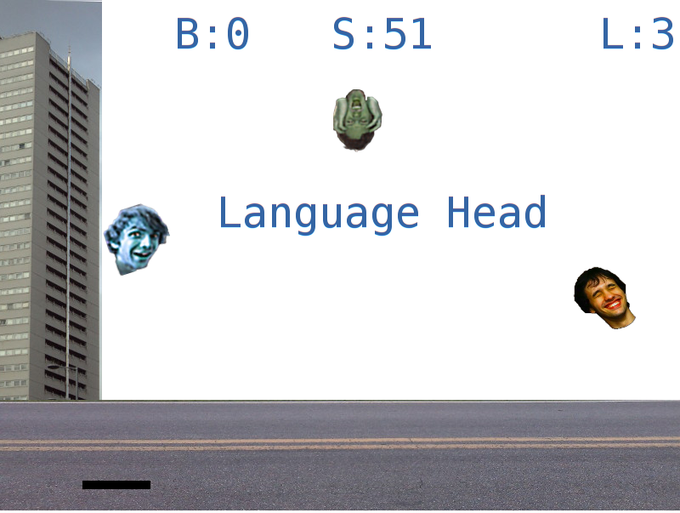 But after that, the whole thing became a lot more fun. You see, day 3 of Elm consists of a workthrough of one bigg-ish Elm program. Bruce Tate talks us through how the game, called Language Head works. And the exercises take us through adding extra features to the game.

You can grab a working 0.14 compatible version of Language Head from my Seven More Languages repository if you would just like to get cracking on the fun stuff.

Adding extra features is reasonably painless for much of the time, at least if you have a reasonable grasp of a language like ML or Haskell. The genius of the whole thing is that we are just manipulating streams of data. No 'clever' stuff is going on at all.

Here is how my final version of the game looked; it is just iframed in, click it and press space to start the game. Alternatively, just play on another page. Incidentally, if you use the vimperator firefox extension, you will need to press shift-esc to allow Elm to capture your keyboard input.

The final Language Head code is sitting in my Seven More Languages repository if you’d rather read it that way.

Provide another message that asks the user to press the spacebar to start.

This was a nice straightforward task, I just extended the stateMessage code a little. stateMessage state = case state of GameOver -> "Game Over" Pause -> "Press spacebar to start" otherwise -> "Language Head"

Make the heads bounce more times as they cross the screen.

Add some random elements to when the heads get added so that all of the games are no longer the same.

I just tweaked the head spawning code such that about half the time an head would be added and then at a more random interval than before. I also changed the code to make sure that only a maximum number of heads were in play concurrently. -- don't show more than this number of heads at a time maxConcurrentHeads = 3 -- Probability that a new head will be shown per evaluation -- of spawnHead all other factors being equal newHeadProbability = 0.5 -- Witness the silliness of my random seeding strategy. -- Just use the already calculated rand and do spurious -- maths with it. spawnHead score heads rand = let (addProbability, seed') = generate (float 0 1) (initialSeed (11+rand*36712)) divideScoreBy = ((1+rand) * 1000) addHead = length heads < (score // divideScoreBy + 1) && all (\head -> head.x > 107.0) heads && addProbability > newHeadProbability && List.length heads < maxConcurrentHeads in if addHead then defaultHead rand :: heads else heads

Make the game choose a random head from a list of graphics.

As I read this it means pick the head from a list instead of using the headImage function. First I made my list, then a small convenience function to tell me its length minus one (that is its max index). Then I implemented the Haskell !! operator (after a fashion) and finally implemented the actual headList' function, which has the same effect of the older function. Though in theory it should be slower. Not that I noticed though. headList = [ "img/brucetate.png" , "img/davethomas.png" , "img/evanczaplicki.png" , "img/joearmstrong.png" , "img/josevalim.png" ] headListLen = length headList - 1 -- A partial function, to return the nth element of a list -- like in Haskell infixl 9 !! xs !! n = List.head (List.drop n xs) headImage' n = if n > headListLen || n < 0 then headList !! 1 else headList !! n

Don’t allow another head to be added too closely to an existing head.

Of course this was not necessary. I could just check whether any of the heads x co-ordinates was less than a number and know that, if it was, that particular head was still near the left hand side and thus too close to allow another to be spawned. gapOK could be redefined thus. gapOK = all (\h -> h.x > gapBetweenHeads) heads

Show a different kind of head when one reaches the bottom.

I skipped a few of these exercises. I am fairly confident I could do them but ran out of time.

As written, the game allows heads to be added so that they reach the bottomm at potentially the same time. Prevent this from happening.

You might twiddle the vy of heads whose y was close to one anothers’ I suppose. Didn’t do this one.

Add other features that show up at different score increments. For example, bounce the heads when the user presses a key. This will let the user survive when two heads reach the bottom at the same time.

Give the user three lives. Add additional lives when the user hits a certain score.

Provide a better formula for when to add additional heads.

Add another paddle users could move with the A and D keys, or arrow keys. Two paddles and more heads!

I have been very impressed by Elm. It is a well though out and, importantly, fun language and I am almost certain to come back to it in the future. There is a lot to recommend Elm:

Of course, as Bruce points out, Elm may be harder to learn than some languages and the type system might be tricky to get your head round.

Elm is quite young. It will be some time before we know whether Elm will gather enough critical mass to break out beyond the emerging languages camp.

Which is very true. Indeed the youth of the language led to my biggest woe with it — the breaking changes which necessitated translating all the exercises. This is just how it is with young languages (sometimes older languages too — Python 3 springs to mind).

A couple of other considerations spring to mind too.

Still overall there is a lot to recommend Elm, and my excitement on the first day has proved well-founded. As Bruce says in his concluding remarks:

With Elm alone, you can tell a great deal about language evolution. We’re seeing a movement toward reactive concepts in the user interface and we are seeing the Haskell type system have an increasingly profound impact …

Next language: Elixir. Until then, adieu.