This year, it was 10 years since the first OpenTech event. I’ve been to a fair number of the events and I rate it as one of the best tech conferences going. It is cheap (a fiver for the day), has reasonably good politics and a good percentage of the speakers are women -- unfortunately a rare thing in the tech community. 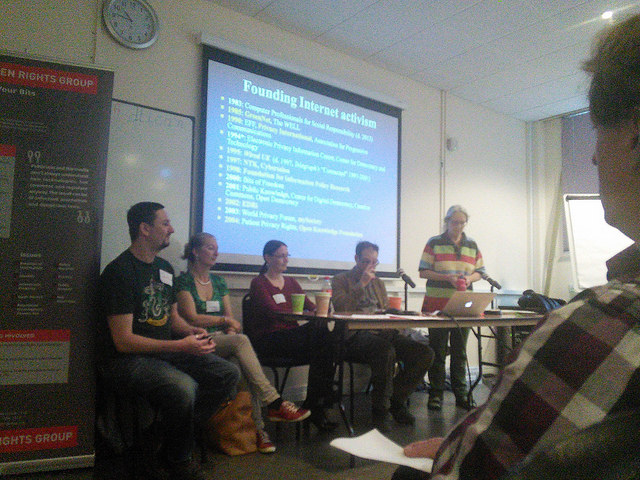 The event is sponsored by the Open Data Institute, meaning that innovative uses of data and discussions about the ethics of privacy are prominent in the program. It was good to hear from Phil Booth who asked us if we knew what happened to our medical records (quick answer: no). He reminded us of the depressing truth that most civil servants still do not understand the difference between shared, big and open data. Or that personal data is not (and should not be) open data. Of the 0.7-1.2 million people who opted out of having their medical records shared none of them have so far had their wishes respected.

In another data-related talk, Leah Borromeo presented artistic work on the "sonification" of climate data. The resulting Climate Symphony sounded pretty good. And presenting the data as audio felt viscerally engaging in a way that perhaps wouldn’t have been as moving visually.

Not all the sessions were directly data-related, however.

In the first session of the day, Sarah Brown talked about her experiences of being stalked on the internet. As a trans person in the public eye, she told the stories of the familiar, depressing, day to day low level harassment which most women suffer. The she shared 2 incidents of more serious targetted harassment that have been directed at her in the past 2 years. She gave practical tips for how to avoid being a target of trolls in the first place (mostly sensible opsec precautions), building up a solid support network if you are victimized and she mentioned that the police had been useful in one of the incidents, though she recognized that might not be a safe thing for many people.

In an eye-opening, shocking and hilarious talk, Terence Eden’s spoke about how he hacked 1000 government websites (and how we could stop him). He revealed the horrific state of some of the sites hosted under the .gov.uk and .nhs.uk domains; viagra spam, unpatched wordpress installs and XSS vulnerabilities are all over the place.

There was a good privacy update session, covering what is likely to happen when the UK government replaces the existing largely baffling and crap RIPA legislation. Kat Matfield also presented some interesting results she’d found when researching a privacy product that would make privacy accessible for normals. She identified a "dark pattern". You can make people think that a form is secure just by putting a picture of a padlock on it. This seems to scale. Adding more padlocks makes people think that things are more secure. They found a remarkable correlation and have yet to discover "peak page padlock", even going so far as to replace the characters in the password field with little padlocks. Scary stuff indeed.

Some of the other sessions looked like they would be fascinating too, but I snuck off to the bar in the afternoon. All in all I had a great time and hope that OpenTech happens again next year.