Can it really be 30 years since the screen of an Elektronkia 60 in Moscow first lit up with a series of tetrominoes dropping incessantly towards the Earth? Since tinny speakers first tinkled to the highly catchy eight bit faux soviet music of Tetris? Indeed it can. In 1984, Alexey Pajitnov unleashed Tetris on an unsuspecting word and somehow tesselating 2d shapes would never be quite the same again. 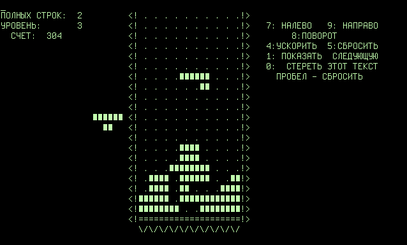 Tetris screenshot, from wikipedia. Thanks :-)

Over the years Tetris has sold more than 170 million copies, been declared the "Greatest Game of All Time" and even been used to document the complete history of the Soviet Union.

Of course, cultural icons like Tetris often inspire Hollywood, surprisingly Tetris the movie never became the box-office phenomenon that many thought it should be.

Of course, no article about Tetris would complete without some filthy tetris-themed 8-bit techno. Here goes then …